Before the pandemic, City Catering was one of the busiest food businesses in Seattle for 21 years. It was founded by Lendy Hensley and run with business partners Shana Hicks and Katy Carroll. The LGBTQ-owned, Woman-Owned company converted a 6,000 sq. ft. space in South Lake Union into a production kitchen and small event space, hired dozens of employees, and built an impressive business. They were named 'Seattle's Most Creative Caterer' by Seattle Magazine, and received a variety of local and national press. Then, the pandemic shutdown the city.

City Catering lost 98% of their business the year of the shutdown. They shut down four of their cafes, their catering services, and had to lay off over one hundred of their employees. Their last fully attended event was for 600 people on February 29. This wasn’t over for City Catering though, far from it. In fact, it was the start of a new beginning.

The lockdown had forced the company to come up with a plan to make the best of a tough situation. It had become apparent to that COVID-19 was going to be around for a while, so the solution to their problem was to go digital. But how could they bring food to virtual events? 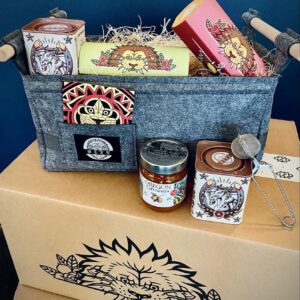 City Catering wanted to create something that they knew could last beyond the pandemic. After extensive thinking and planning, the company evolved and took on a new direction.

The team had fallen in love with the idea of creating gift baskets for their customers. The next two questions that they were battling were how can they make this idea permanent? and how can the recipes they make turn into packaged foods that can be sustainable beyond COVID-19? Well, in April 2020, Bite Society, a gift basket company now a part of City Catering was born.

They started looking at things they made when they were running their cafes. Common items they created were pickles, potato chips, and snack mixes for parties. They also had a robust pastry department of cookies. Hensley and her coworkers started working on developing recipes from home and their commissary which had also shutdown. 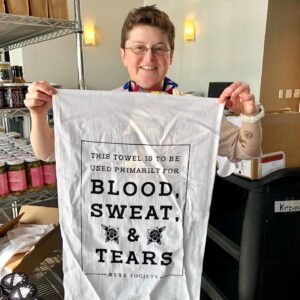 Owner Lendy Hensley learned about Business Impact NW and their offerings around this time. Hensley was paired with a business coach, Jessica Conaway, to help her with the pitch she was working on for Bite Society.

“[My business coach] helped me write my pitch for Bite Society," said Hensley. "She helped put the delivery visuals that I put with it and I won two different pitch competitions with it and a large part of that was from the coaching I got with Jessica.”

Hensley said when there's something new you want the public to know about, business pitches are a key skill you need. After much time and dedication being spent trying to make the best out of a touch situation, Hensley and her crew knew that they had found the light at the end of their dark tunnel. Bite Society was ready to launch into the world.

“I was walking my dog while I was thinking about what I wanted for my artwork and I was like, oh my God tattoo shops are closed right now. Those guys are sitting at home, why don’t we try and reach out and hire some? And so we did,” Hensley said. The Bite Society team had placed ads all over the United States. They eventually hired tattoo artists to draw up their artwork. One artist in particular caught the organization's attention and they hired him permanently as their art director. “I think of our cookie sleeves kind of like a tattoo sleeve,” Hensley said.

Once things started opening back up, so did City Caterings cafes where they decided to continue running both businesses. Hensley envisions Bite Society as a refreshing start, creating something new within the old.

“We would have never started Bite Society without the pandemic,” Hensley said.

Transitioning a company in a whole different direction can be challenging. Fortunately for Bite Society, they already had a good base of connections thanks to their devoted community through City Catering. They put together many corporate catering events, made connections through Facebook, and expanded their social media presence. Now, both City Catering and Bite Society have major press through a variety of news outlets. 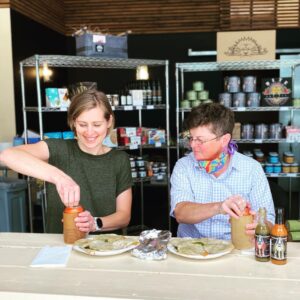 BUILDING A SOCIETY THAT DOES GOOD

“One of the wonderful things about this direction is it really gets us back to the roots of what we enjoy most about food," Hensley said.

Through meeting people with the same passion for food as herself, Hensley gets to meet growers and ingredient makers with extensive knowledge on food. The company is currently working on new cookie recipes that bring in creative ideas from other bakers. Some of the people she has met now have joined her team to work for Bite Society.

"On the product development side it's just wonderful to be able to work with other food makers in town and beyond on new ideas that we have," Hensley noted. "It’s pretty exciting.”

Hensley and her company are also devoted to building a community through shared projects.

“One of the things we’ve done is we’ve had a tin made for pride,” Hensley said. “Five dollars of each sale of the tin goes to GSBA. Their logo stands on the tin and I think that’s a great way for us to engage our community through some shared projects where they get some money as a nonprofit and they’ve been incredibly supportive of us."

We are thrilled to see City Catering's successful pandemic pivot into building a new branch of their passion for food, Bite Society. We can't wait to see all that they continue to build and develop in their new venture.